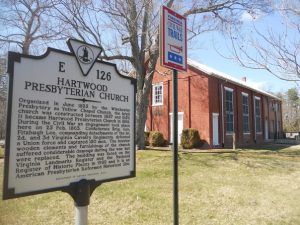 A chapel-of-ease of Brunswick Parish, called Hartwood Chapel, existed at the site by at least 1767, when it was cited as a landmark in orders for repairing the road that ran by it.

The half-acre containing the chapel was sold to the parish in 1771 by Arthur Morson for five shillings “current money of the colony of Virginia,” subject to an annual payment of “one pepper corn, on St. Michael’s Day, if demanded.” Morson, a Scottish immigrant merchant whose businesses centered in Falmouth, built his home, Hartwood, about eight miles northwest of Falmouth, on the same tract as the chapel. Referred to in some eighteenth and early nineteenth century documents as Yellow Chapel, for reasons not now known.  After the Revolution and the disestablishment of the Anglican church, the chapel began to be used by Presbyterians, perhaps as early as 1798, when Morson was buried in the churchyard. The old church was definitely Presbyterian by 1807. 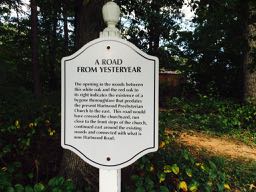 Between 1858 and 1859 the Irvine family built the church structure on their own land.  The brick structure was built in the Greek revival vernacular. The remnants of a brick kiln on the nearby old Irvine farm mark the place where the bricks for Hartwood Church were burned.

The simple Greek Revival architecture of the church is an important part of the range of Greek Revival expressions, particularly in religious buildings, in the Stafford-Fredericksburg-Spotsylvania region.

Like many of the churches in the area, Hartwood Presbyterian was occupied by both Northern and Southern troops.

The Union Army occupied it for the most time. They set up camp there, causing great damage to the building.

Hartwood Presbyterian was frequently the scene of contests between portions of the two armies, for its possession, but was finally left in the hands of the Federal Union Army. They used it for a hospital where the sick & wounded were brought. They were sometimes without physicians, and many necessary comforts were supplied as far as possible by the citizens, both by their visits and their means.

Hartwood Presbyterian Church was the specific site of Wade Hampton’s November 1862 capture of 137 men of the Third Pennsylvania Cavalry, most of whom were asleep inside the church building. According to the later assessment of Douglas Southall Freeman, this was “the first independent operation undertaken in Virginia exclusively by cavalry from states farther south.” The Union officer in charge, Captain George Johnson of the Third Pennsylvania Cavalry, was subsequently dishonorably discharged for “negligence and disregard for orders” in connection with the capture. The church was also the specific location of five skirmishes in the fall of 1863.

During the Civil War, all the wooden parts of the building were used for firewood, and a description of the church’s condition written in 1866 recorded that “at the last not one vestige of the timbers or flooring was left. The pulpit, carpet, seats, blinds, sash, doors and everv thing that was combustible was burned leaving the brick walls standing.” The same document contains a list of members who pledged from one dollar to ten dollars each to rebuild and restore the church.

It is likely that some of the unmarked graves, or others not apparent in the church graveyard, are those of soldiers who died in the skirmishes at the church or during its hospital use during the Civil War.  There are two Civil War veterans buried in the church’s cemetery whose graves are clearly marked.  One is Francis Mankey, Co. B, 98th Regt. Penn. Infantry and the other is Elisha J. Bell, CSA.

Though it took some time, because the war left the region very poor, the church was repaired between 1868 and 1872 through parishioners’ donations. The church restoration was complete enough by 1868 that, on April 10 of that vear, East Hanover Presbytery officially changed the name from Yellow Chapel Church to Hartwood Church.

In 1872, the Irvine family gave the church building and one acre of land “more or less” to the trustees of Hartwood Church, the present owners; “with the earlier half-acre, the actual total of the two parcels was about 1.768 acres, the area of this nomination.” The Irvines also gave the church its pulpit furniture: a communion table, two chairs, and a sofa, all of which are still in use today in the Hartwood’s Sanctuary.

In 1915 the U.S. Congress voted $500,000 in reparations for Virginia property damaged by U.S. troops, of which $800 was paid to the trustees of Hartwood Presbyterian Church.

The addition of the education and service wings of the 1950s and 1960s completed the building as it now appears. The continued use of the same design and structural themes in the additions is a reflection of the preservation ethic of the community, as is the 1930s re-use of steps from the Fredericksburg Presbyterian Church as benches in the yard.

In 2000, the church built the Christian Education Complex (CEC) on its property. It is used to house the church office and for many church and community functions, including Hartwood Presbyterian Preschool, the church’s sponsored Scout troops, and as the local area’s voting location.

Hartwood Presbyterian Church is listed on the National Historic Register of Places.  A historical marker is installed in front of the church.